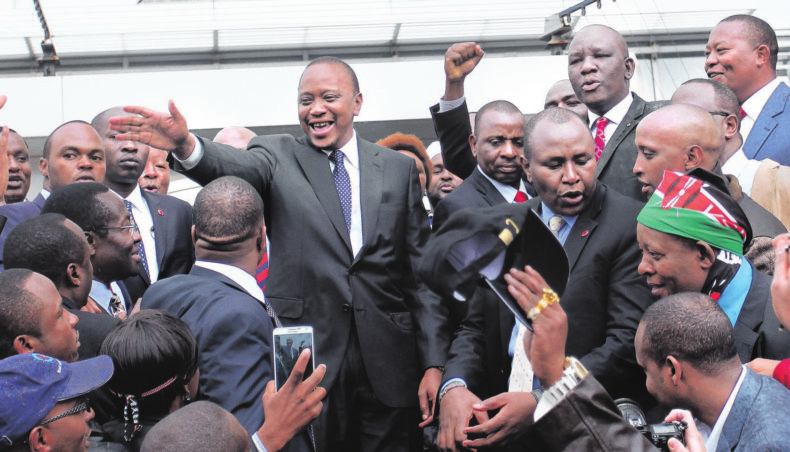 The status conference was held on 8th October 2014. Kenya's President Uhuru Kenyatta was in attendance after obeying summons by the court.

See the videos for the conference held on both the 7th and 8th October 2014.

The following a summary of the case progression thus far as posted on the ICC website.

Accused of five counts of crimes against humanity in the context of the 2007-2008 post-election violence in Kenya.

Mr Kenyatta is accused of being criminally responsible as an indirect co-perpetrator pursuant to article 25(3)(a) of the Rome Statute for the crimes against humanity of:

OPENING OF THE INVESTIGATION
On 5 November 2009, the ICC Prosecutor notified the President of the Court of his intention to submit a request for the authorisation to start an investigation into the situation in Kenya pursuant to article 15(3) of the Rome Statute, about the 2007-2008 post-election violence in Kenya in which around 1,300 people were allegedly killed.

SUMMONSES TO APPEAR
On 15 December 2010, the ICC Prosecutor requested Pre-Trial Chamber II of the ICC to issue summonses to appear for six Kenyans on the basis that there existed reasonable grounds to believe that they were criminally responsible for crimes against humanity.

On 8 March 2011, Pre-Trial Chamber II, by majority, issued the decisions on the applications submitted by the Prosecutor and summoned Francis Kirimi Muthaura, Uhuru Muigai Kenyatta and Mohammed Hussein Ali to appear before the Court.

At the initial appearance hearing, which took place on 8 April 2011, the Chamber scheduled the confirmation of charges hearing in this  case for 21 September 2011.

On 18 March 2013, the charges against Francis Kirimi Muthaura were withdrawn.

On 23 January 2014, Trial Chamber V(b) vacated the trial commencement date of 5 February 2014 in the case of The Prosecutor v. Uhuru Muigai Kenyatta.

On 19 September 2014, Trial Chamber V(b) vacated the trial commencement date in the case The Prosecutor v. Uhuru Muigai Kenyatta, which had been provisionally scheduled for 7 October 2014.

The Chamber also convened two public status conferences for 7 and 8 October 2014 to discuss the status of cooperation between the Prosecution and the Kenyan Government and issues raised in the
Prosecution's Notice of 5 September 2014, respectively The defendant is not in the custody of the Court.

PARTICIPATION OF VICTIMS
725 victims are participating in proceedings in the Kenyatta case and are represented by Fergal Gaynor.

Composition of Trial Chamber V (b)


The Office of the Prosecutor


Legal Representative of the Victims