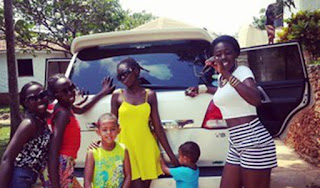 She’s a singer without much of a voice, a socialite without what passes for the look; regular backside, D-Cup breasts; yet she’s been the mainstay of many a conversation at water coolers across Kenyan offices.

Married at 14, "housegirld" at her mother-in-laws at Migori for 7 years, she went on to have kids at 14, 15 and 16. Sold Omena at Kanga, Kisumu, whilst schooling and got a C+. Moved to Nairobi after patching things up with her hubby, but was then dumped in 2006 and left with 3 kids on her lap.


Word on the street is that she drove a taxi in Mombasa where she met a Diplomat, then moved to Zurich - where they had a son, 9 months later, she returned upon learning the guy had no plans for marriage. She had gathered enough money on her travels to enable her to invest in her own taxi business. Good fortune - in form of white men - seems to stalk her in spades; she met a Frenchman who was then the French ambassador to Djibouti. They went on to father her last born son... they are now separated.

With interests in property (Akothee Property), Tours and Travels (Akothee Safaris) and farming - a portfolio valued at over Kshs 300 million, high-profile collabos with TZ’s Diamond and Nigerian Flavour; this lady from Migori is a long way away from selling fish on the streets of Kisumu.
Entertainment Society & Culture