on February 19, 2020
Stretching from Greenland to South Africa, New York to Zanzibar and everywhere in-between there are hundreds of exciting travel destinations. However, the face of tourism is quickly changing as people look for something out of the ordinary. Adventurers, in particular, have an insatiable appetite for the extreme, peculiar and even shocking. Here are ten unique travel destinations with a real twist to entice the daring adventurer.

This rustic village in northern Russia has the unenviable distinction of being the coldest inhabited place on the planet. On a typical January day, the temperature averages -58°F (-50°C). On one particularly cold day in 1926, a reading of -96.16°F (-71.2°C) was recorded. Temperatures are usually below freezing from October to April annually. Yet, despite this extreme weather, the village has a population of just under 500. 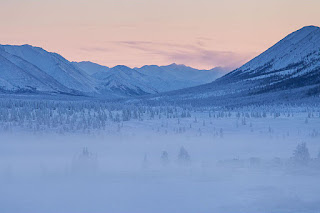 Enterprising locals have turned the harsh weather into an opportunity for adventure travel. The Pole of Cold Festival was launched in 2001 and accords visitors the opportunity to enjoy ice fishing, reindeer sled riding and the chance to make various practical experiments on the effects of cold and frost in a number of situations.

A 2004 National Geographic documentary described Dallol as the hell hole of creation. It is situated in the Danakil Desert, northern Ethiopia, where temperatures average 94 °F (34 °C) all year round. In addition to this extremely hot weather, the area is geographically unstable. Scientists have established that during prehistoric times, the territory used to be a gulf – the sea bed rose briefly before retreating and forming the Afar depression. Tremors are common and there are several active volcanoes. Geysers spew a salty concoction that results in stunning color surfaces. 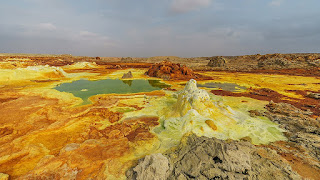 Despite this inhospitable environment, Dallol is home to the nomadic Afar people. Their economic mainstay is sheep herding and trading salt extracted from several small lakes that dot the Afar Depression.

You would have to visit Salar de Uyuni to believe; for miles all around is a flat endless sea of white. At almost 11,000 square km, this Bolivian salt flat is the largest in the world. It is remarkably level; the variation in elevation is less than one meter over the entire area. The salt flats are the remains of a prehistoric lake and there are no drainage outlets. Hence, the water evaporates and the salt is left on the bed of the lake. The massive white lake is dotted with kaleidoscopic chasms of red, blue and green caused by sediments containing copper. Pink flamingos occasionally provide a startling contrast to the bright whiteness. 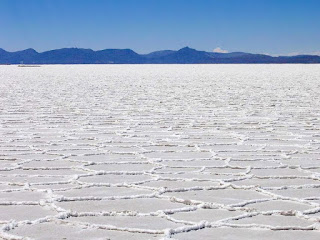 Salar de Uyuni is a photographer’s dream, providing a great backdrop for some amazing shots. If you have ever wanted to visit another planet, this comes pretty close.

There are only 275 residents on this island located between South Africa and South America. The nearest neighbor is 2,430 km away, the St Helena Island. There is no airport which makes getting to the island an adventure in itself involving a six-day trip aboard the SA Agulhas, a former South African polar research vessel.

You would think that the world’s most isolated community would relish the chance to entertain visitors but the official website states, “There are no package tours for independent travelers, no hotels, no airport, no holiday reps, no night clubs, no restaurants, no jet skis nor safe sea swimming.” 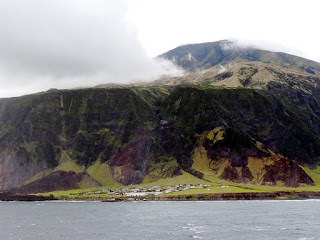 So, why would anyone want to visit this island in the first place? Well, it happens to be a Unesco World Heritage Site and also offers some of the world’s best-preserved marine ecosystems. Tristan da Cunha also has one of the largest bird colonies. Spectacular cliffs overlooking the vast Atlantic also reel in visitors.

The world’s deepest explored cave extends 2,197 meters into the earth’s surface. Krubera is found in the Arabikka Massif of Gagrinsky Range in Abkhazia. It attracts adventure seekers, scientists, and explorers. The cave was recognized as the deepest cave in the world following a 2001 expedition organized by the Ukrainian Speleological Association. Since then, successive teams have managed to penetrate further into the cave by diving and looking for alternative routes downward. There are several hundred amazing caves in the Arabika Massif region. Early French explorers were motivated to explore the caves by Jules Verne’s literary classic “Journey to the Center of the Earth”. 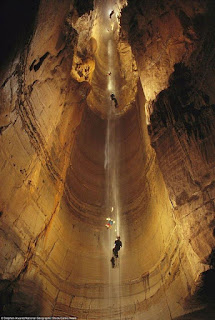 Several arthropod species inhabit the cave and the deepest terrestrial animals were discovered here in 2010. Krubera can only be accessed four months in a year due to the remoteness of the area.

A persistent combination of heavy rain, fog and wind give these islands in southwest Alaska the dubious distinction of having the worst weather in the world. A missionary priest who lived on one of the islands for seven years recorded only 53 days of sunshine … during the entire seven years! 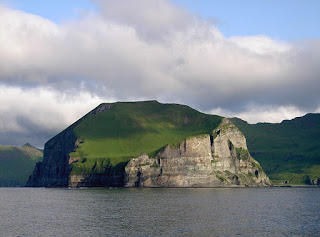 It is a destination for the truly adventurous seeking untamed beauty courtesy of active volcanoes that rise from the ocean. The ancient Native American Unangan (Aleut) people have mastered living in this extreme environment. Beyond that, the beaches are strewn with ornamental stones and more than five million birds make this their home during the summer. However, the large majority of visitors go there for the fishing opportunities; halibut and various salmon species are abundant from June to September.

To say that a flight to and from this airport is sheer terror is to make the understatement of the century. Lukla is the gateway to Mount Everest. Adventurers on their way to Everest have two options, they can hike for an extra five days to Everest Base Camp or they can choose to take a 45-minute flight to Lukla thus saving time and energy. 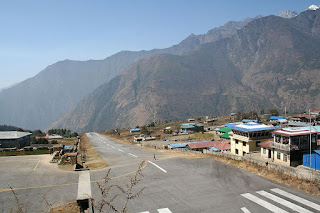 Tucked 9,000 ft. high on the slopes of a snow-capped mountain in the Himalayas, the airport has a 1,500 ft. runway that ends in a precipitous cliff on one end and a mass of solid rock on the other. Pilots only have one shot to land or take off. Once planes start hurtling down the runway or make a landing approach, there is no turning back. It’s no wonder that this airport leads in crashes - at an average of one per year. Despite this, adventurers on their way to Everest continue to transit through this airport.

There is consensus amongst marine scientists that the Cape of South Africa contains the highest concentration of sharks and specifically, the dreaded great white. If you want to come face-to-face, quite literally, with one of nature’s most efficient killers then the Shark Alley sea channel off Gansbaai town in South Africa is the place to be. The huge concentration of great whites is attributed to a colony of about 50,000 cape fur seals that live on Geyser Rock. Seals are a favorite prey of great whites. 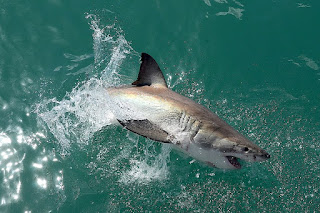 There are so many great whites in Shark Alley that tour companies guarantee tourists a close encounter. Some companies go as far as offering a cage diving experience. Things have occasionally gone terribly wrong such as an incident in March 2013 when a great white ignored the bait and forced a cage door open. The occupants, astonishingly, escaped unhurt.


Most dolls - Isla de las Munecas (The Island of the Dolls), South of Mexico City, Mexico

The intention was never to become a tourist attraction but the Island of Dolls in Mexico ended up as one. It can only be described as a perfect combination of creepy and weird. The island is dedicated to the lost soul of a young girl who died under mysterious circumstances. There are several baby dolls hanging from trees. Some have severed limbs while others have decapitated heads. They are believed to possess the soul of the departed child. 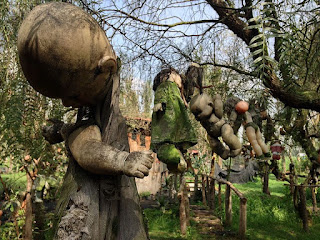 It is said that the caretaker of the island found a dead girl who had apparently drowned under unclear circumstances. Later, he saw a floating doll which he assumed belonged to the dead girl. He picked up the doll and hung it on a tree as a sign of respect. Haunted by the spirit of the dead girl, the caretaker began hanging more dolls on trees as a way to appease her spirit. Fifty years later he was found dead at the same spot as the drowned girl. By the time of his death, there were hundreds of creepy baby dolls hanging from the trees.

Now, this one borders on the bizarre. One would not expect a rat-infested place to be a tourist magnet. Yet, Karni Mata Temple in Deshnoke, Rajasthan State of India is a crowd puller. There are thousands of brown rats (estimated at over 20,000) scurrying all over the beautiful marble temple.

Karni Mata was a 14th-century Hindu sage believed to be the incarnation of the goddess Durga. According to legend, her stepson drowned in a pond and she begged the god of death to bring him back to life. Yama, the god of death, obliged reincarnating Karni Mata’s stepson and all her male children as rats. Since then, she is said to have declared that everyone from her tribe would temporarily inhabit the body of a rat before reincarnation. 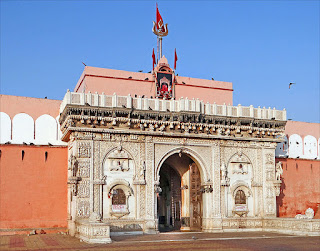 It is considered a good omen if a rat runs over your feet and even better if the rat is white. Eating food nibbled on by the rats is akin to eating with the gods. Killing a rat attracts severe sanction, it must be replaced with one made of solid gold. Interestingly, there has never been an outbreak of any rat borne disease among the people who have visited the temple.
Travel